If you might be into some serial killer poetry, check out my book on Amazon and Goodreads.

Insanity splits through the air
like a serrated knife cleaving
melons in half, juice pools out,
lightly blood-tinged, flowing into
the mob mentality of fair-goers
flies stick to the glistening liquid
churning out tiny spawn to harvest
inside the mind of crowds

stop and sample the new
flavors of candies,
watch in awe as Tesla
sparks electric excitement,
conducting lightning through
his body like a melody,
marvel at the Ferris Wheel,
that monstrosity of a ride
hovering between adrenaline
and a drop straight down to skull-
cracking fear

within the White City’s celebration,
the water stays pure, the air cool,
horrors belong on the outside
where suicides have popped up
like cherry-tinted daisies,
where horses drop dead
in the streets from exhaustion,
muzzled and blinded
they never stood a chance,

where blood runs thick enough
to brew gurgling tarns
around the great fair,
drown all the attendees
beneath a scarlet siege,
consume that split of insanity
cleave the city in half as it bleeds

“Tantlinger’s chilling poetry, inspired by life/lies of a serial murderer, unfolds in the imagined voices of his victims, and the man himself, in a city reduced to ashes and rebuilt for him to bleed. The poems entice to try understanding this devil: what does he gain from such horror? In the end, after he is hanged and buried, the haunting last poem plants the idea: evil is more than one man and isn’t easily destroyed.”

—Linda D. Addison, award-winning author of “How to Recognize a Demon Has Become Your Friend” and HWA Lifetime Achievement Award winner

“In this morbidly creative and profound crime documentary, Sara Tantlinger delivers one of the best works of horror poetry I’ve read in years. What America’s Ripper, HH Holmes, built with his creatively sick “murder castle” in 1890’s Chicago, Tantlinger creates today with this book, rich with seductive language and unflinchingly exploratory in its multifaceted structure. It’s brilliantly constructed to get inside your skull and pry apart your morbid fascination with life, death, perversion, avarice and murder, awakening you to the evil that hides in plain sight around us all. Readers will thrill to find themselves spilling down its terrifying trapdoors and careening down its greasy dark slides, until they find themselves imprisoned inside the black gloom of a deviant dungeon of nightmarish evil that they’ll never be able to forget…or escape. An amazing autopsy of the unholy!”

“A fascinating and absolutely riveting journey into the life and times of one H.H. Holmes. Sara Tantlinger’s powerful and vivid prose takes you into the depths of Holmes’ dark universe and what you see will stay with you long after you’ve closed the book.”

My next poetry collection, The Devil’s Dreamland: Poetry Inspired by H.H. Holmes, will (hopefully) be out in a few weeks! Dr. Holmes and I can’t wait to welcome you into our nightmares…

But for now, I thought I’d list some of my favorite “fun facts” about Holmes that inspired

a few pieces in the collection. Holmes is a tricky case — many of the “facts” we assume were actually tall tales that morphed into a kind of accepted truth; however, playing around with those blurred lines and blending historical horror with fictional interpretations was deliciously morbid and fun for me to do in this collection.

1. Holmes was “married” to three women at the same time. Only the first marriage to Clara was legal. He would later go on to “marry” Myrta Belknap and Georgiana Yoke though he had never divorced Clara. Holmes killed several women, including a few mistresses, but he never killed any of his three wives. This inspired my poem “Three Wives Dressed in Black,” which makes an appearance toward the end of the collection as Holmes sits in his jail cell before his public execution.

2. While the rumors and ideas linking H.H. Holmes and Jack the Ripper as the same person are amusing and intriguing to think about, I’d never buy into it. Logistically speaking, from what we know of Holmes and where he was in the states and when, I think he would have had to been able to teleport to truly commit the Ripper’s acts. While some may be able to speak around this, the number one reason I would never credit them as being the same is because of how different their killings were.

The Ripper was vicious and intimate. He literally reached inside of his victims and had his fun with their organs or slicing off women’s breasts (I imagine the Ripper is a deeply fascinating case to all the Freudians out there). Holmes was never that intimate or messy. In my head I imagine his neatness likens to that of NBC’s Dr. Lecter on Hannibal. Holmes was cowardly in his approaches though, using chloroform or gassing victims to their deaths. He was more fascinated by the psychological approach, by seducing and charming before quietly extinguishing lives rather than tearing someone apart into a gooey bloodbath. I have two “Holmes vs. The Ripper” poems in my collection, and they were two of my favorite to research and write.

3. While in prison, Holmes wrote two notable texts. One was a rather idyllic memoir that he crafted in hopes to gain public sympathy and to try and convince people that he was 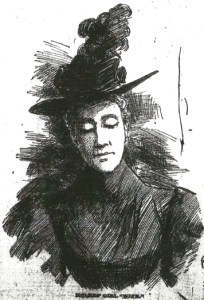 being falsely accused of all these crimes. After that failed to work and he was convicted, Holmes wrote a rather odd “confession,” in which he wrote of murdering people who were in fact proved alive. There are some really interesting analyses out there that go through who he may have actually murdered vs. who he, for some reason, claimed to have killed but did not. I found access to both the memoir and confession, which easily inspired the voice I use for Holmes within my collection, and inspired many poems toward the end within the sections where he’s in prison. What struck me the most was Holmes’ undeniable intelligence and merits of literacy within his writing. An articulate madman with a pen, wielding words with expert manipulation, is truly a frightening thing.

4. Appearance wise, Holmes was considered handsome at the time. His blue eyes get noted often, but I also came across in my research that he may have been cross-eyed, which inspired my poem “Strabismus,” and a few others in the collection. One eye on the victim, one searching elsewhere…studying the shadows…looking for the devil.

5. After leaving Chicago, Holmes eventually went to Texas where he engaged in more money schemes and fraud, as he did in Chicago and elsewhere. He also attempted to construct the Fort Worth Castle, a building similar in strangeness and massiveness to the famed “Murder Castle” in Chicago. By this time, numerous lawyers, unpaid workers, and members of law enforcement were trying to find Holmes to get some answers for their missing payments. Holmes would leave Texas, soon after embarking on the wild chase across the states that would lead to his arrest, but of course not without a few more dead bodies along the way. I have a section of poems in my book that go through this chess board pursuit, and I can’t wait to take you along for the ride.

So wait patiently. Buy your train ticket. The good doctor is already there, seated quietly in first class, drinking his tea and eyeing you as you walk past…one eye on you, the other on the shadows…searching…waiting…

In 2015 I watched a documentary on Netflix titled H.H. Holmes: America’s First Serial Killer. I took notes, fascinated, wanting to do something with this savagely strange killer…a couple years, an MFA degree, and some publications later, I finally found precious time to sit down and research Holmes for my next poetry collection, The Devil’s Dreamland: Poetry Inspired by H.H. Holmes, which should be out later this year.

So until then, let me offer you some Valentines, H.H. Holmes style, while I continue researching and writing and dreaming in the darkness. Who better to do romance than a serial killer doctor who had three wives at once, courted mistresses, and stuffed some of them into trunks after killing them?

Actually, a couple years ago the Pittsburgh ScareHouse featured a Holmes “murder hotel” theme in their Basement that I went to for Valentine’s Day. You had to sign a waiver before entering since the Basement allows the actors to touch you. Thus, I was electrocuted, blindfolded, shoved in a safe, slightly strangled, chained up by the H.H. Holmes actor, and more! It was great!

Please enjoy these love notes from my muse, this strange, manipulatively charming,

What do you mean everyone doesn’t have stacks of Holmes books and a Holmes coaster? (In my defense, some of these were gifts, ha.)

swindler of a man…or, of a devil, as he would have you know….Try these out on your loved ones and let me know how it goes.

*Roses are red, your lips are blue, I’ll hide your body so well, and poison your daughter, too. For Julia and Pearl

*I want to strip off your clothes and your skin

*With a body like that, you’d make a beautiful research cadaver

*I’ve never met anyone like you. Be my fourth wife? No, it’s okay, I left them alive and only killed the mistresses. I swear!

*Love isn’t refundable, now sign your property and life insurance over to me
-(Holmes was a notorious conman and loved money)

*What’s the key to your heart? *pulls out dissection knife*

*Love is like chloroform, sweet-smelling at first, but then you wake up naked and chained in the basement…

P.s. Artist Holly Carden designed this cool as hell illustration of the Murder Castle here. You should check it out.

The doctor and I bid you farewell, for now. We can’t wait to invite you back into the nightmare dreamland later…

What am I reading?